Influence of Buddhism in Nepal and its Tourism

Buddhism has played a significant role in Nepal’s cultural and spiritual fabric for centuries. The religion first arrived in the country in the 6th century BCE, brought by traders and monks from India. It quickly gained popularity, with the Licchavi dynasty (400-750 CE) becoming devout followers and actively promoting the religion. 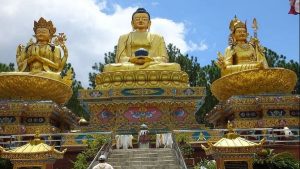 Buddhism in Nepal is predominantly of the Mahayana and Vajrayana schools, which place emphasis on the attainment of enlightenment. They also practice the use of rituals and tantric practices to achieve this. Nepal’s most popular form of Buddhism is Newari Buddhism, which combines elements of Mahayana, Vajrayana, and indigenous Nepali rituals and beliefs.

The Swayambhunath Temple, also referred to as the Monkey Temple, is one of Nepal’s most important Buddhist landmarks. It is situated in the valley of Kathmandu. The temple, which was constructed in the fifth century, is thought to have been situated on the site of a stupa that self-arose and contained Buddha relics. Both Buddhists and non-Buddhists visit the temple, which is included as a UNESCO World Heritage site.

The Solu-Khumbu district in Nepal’s east, in particular, is a significant Buddhist hub in the nation. The renowned Mount Everest, which Buddhists regard as the residence of the gods, is located in this region. Numerous Tibetan Buddhist monasteries, such as the Tengboche Monastery and the Pangboche Monastery, may be found in the Solu-Khumbu region.

Buddhism is also practiced in other regions of Nepal, such as the country’s center and the western Mustang region, which is the location of the former Buddhist kingdom of Lo.

The Nepalese Buddhist Sangha, or monastic community, is crucial to the maintenance and propagation of the faith. Monasteries, or gumbas, are found all over the nation; the Nyingma Monastery in Kathmandu is the biggest and most well-known of these. More than 500 monks reside there, and the monastery is renowned for its huge library and collection of Tibetan Buddhist texts.

In Nepal, there are laity Buddhists in addition to the monastic group who practice Buddhism. Most lay Buddhists adhere to the Five Precepts, which forbid injuring other beings, stealing, immoral behavior toward women, speaking falsely, and using intoxicants. In order to advance, they may also take part in rites and activities including chanting and meditation.

Buddhism in Nepal has had a significant influence on the country’s arts and culture. Religion has influenced the making of thangkas (Tibetan Buddhist paintings), the performance of sacred music and dance, as well as the planning and building of temples and monasteries.

Buddhism in Nepal has recently faced challenges, despite its long history and significant cultural influence. Because of political unrest and the Maoist insurgency in the late 1990s and early 2000s, there are fewer Buddhist believers and monasteries now. Other religions, particularly Buddhism, have been suppressed as a result of Nepal’s rising Hindu nationalism.

To strengthen and reinvigorate Buddhism in Nepal, however, there are currently initiatives under work. Recognizing the significance of the faith, the government has taken action to safeguard and aid the Buddhist community, including funding monasteries and developing a Buddhist circuit to promote Buddhist travel.

Additionally, a number of organizations and groups are trying to support and uphold Buddhism in Nepal, such as the Nepal Buddhist Federation, which aims to bring the nation’s many Buddhist sects together and defend Buddhist rights.

Despite its difficulties, Buddhism nonetheless continues to be a significant part of Nepal’s cultural and spiritual landscape. Its impact can be observed in the nation’s artistic output. Buddhism has greatly influenced Nepal’s culture and way of life. It is a religion that has a long history in the nation and is still vital to contemporary Nepalese society.

If you really wish to visit the land of Buddha, we have got you covered.