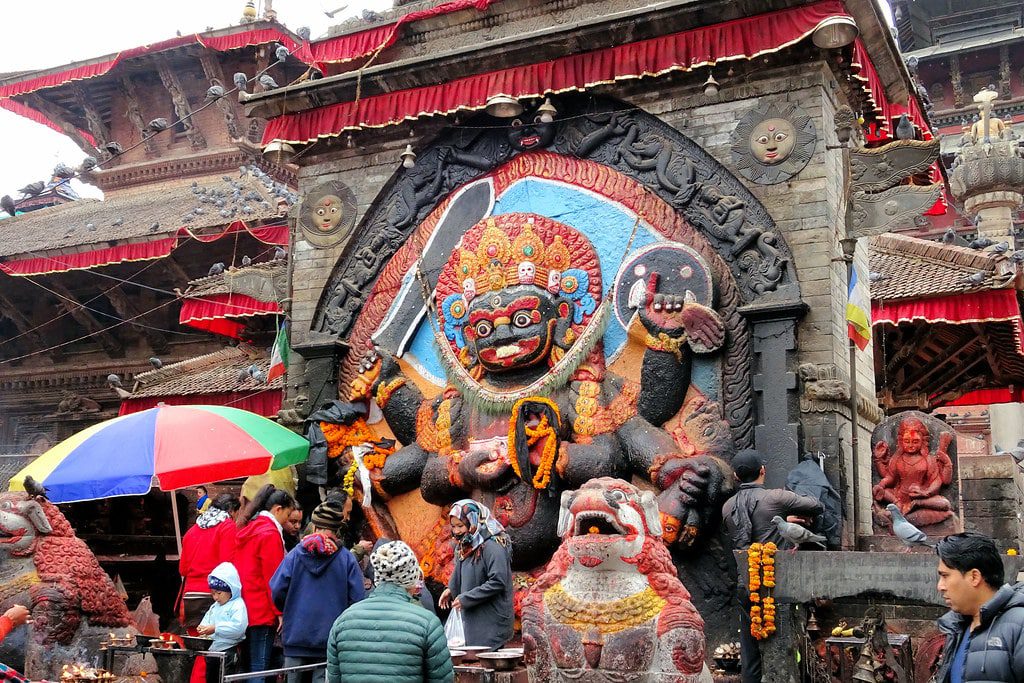 Nepal is a tiny nation wedged in between China and India. Its culture is a blend of spiritual practices and customary traditions such as Buddhism, Hinduism, and some other native beliefs. It has an impressive, proud history that still remains to this day.

In Nepal, the caste system has really shaped its culture, especially when it comes to religious buildings. The Brahmins, who are seen as the most righteous and pure people in Hinduism, often get exclusive access to these places that are decorated with beautiful carvings and designs. People consider them sacred.

In Nepal, the caste system has had a major impact on home architecture. Typically, homes of the upper classes are larger and more elaborate, often with multiple floors, big yards, and fancy decorations made with more expensive materials. Meanwhile, the homes of people in lower castes are much simpler and have basic furnishings; these homes tend to be smaller and less flashy.

Religion is a major factor in Nepalese culture – Hinduism, Buddhism, and Islam all have their own individual impacts on the country’s customs and traditions. It’s awesome how these three different religions all work together.

There are a ton of temples, monasteries, and other religious buildings in Nepal. Check out the Pashupatinath Temple in Kathmandu; it’s amazing with its carvings and golden roof. And while you’re in Kathmandu, be sure to visit the Boudhanath Stupa, which has an incredible dome. An excellent method to connect with your spiritual side and learn about traditional values is to visit these locations.

Religion has been a huge factor in forming the cultural identity of Nepal. Building religious sites and celebrating festivals and rituals are all part of the country’s culture. It’s an essential element of Nepali life, even to this day.

The madal is frequently used with religious tunes and hymns, as well as being played solo during special ceremonies and rituals. It’s said that the sound of the madal has a soothing, peaceful effect, and helps bring people closer to the spiritual side.

The bansuri is a big deal in Nepal, especially during religious rituals and ceremonies. People think the sound of the bansuri brings calm and serenity, so it’s common to hear it at yoga and meditation sessions.

In addition to the medal and bansuri, other traditional instruments that are used in religious ceremonies and rituals in Nepal include the sitar, a stringed instrument, and the harmonium, a keyboard instrument. These instruments are used to accompany devotional songs and hymns and are believed to bring people closer to the divine through their soothing sounds. Overall, musical instruments play a vital role in Nepal’s spiritual practices and rituals and are integral to the country’s cultural and religious traditions.

Nepal is jam-packed with ancient culture and religious belief systems, so it’s no surprise that festivals and rituals are such an important part of life there. It’s like a way of life for Nepalese people to express their values, beliefs, and traditions through these events.

Nepal is jam-packed with ancient culture and religious belief systems, so it’s no surprise that festivals and rituals are such an important part of life there. It’s like a way of life for Nepalese people to express their values, beliefs, and traditions through these events.

In Nepal, Dashain is the most significant festival. It’s a ten-day event honoring the goddess Durga, where people worship her, carry out rituals, and exchange gifts. Tihar is the other big one; it’s a five-day celebration to reverence the goddess Laxmi, where oil lamps are lit and sweets are shared.

In Nepal, there’s so much going on all year round! From religious celebrations to cultural festivals – people come together to take part in activities like rituals, giving gifts and having a good time.

In Nepalese culture and religion, gathering together and honoring traditions are extremely significant. They have a wonderful chance to display their principles and ideas. Additionally, it’s a terrific opportunity for individuals to socialize and have a good time while still honoring their beliefs and traditions.

Religion has had a big influence on architecture in Nepal. Hinduism and Buddhism have been the main drivers for the design and purpose of the buildings and structures in the country.

Religion has had a huge impact on architecture in Nepal, particularly when it comes to building temples and shrines. They’re usually very detailed, with lots of ornate decoration and intricate carvings and sculptures – a reflection of how important religion is to the Nepalese people. Temples are also built with specific gods in mind and are used for praying to them and offering them spiritual gifts.

Religion has a big influence on Nepal’s architecture, like the use of stupas. These Buddhist structures are meant to hold artifacts with spiritual importance. People also use them as spots to meditate or reflect in beautiful surroundings.

Religion has had an influence on the design of Nepalese homes and other buildings. You’ll find a lot of them with a little shrine or altar where people can say prayers and make spiritual offerings, which just goes to show how big of a role religion plays in everyday life in Nepal.

Ultimately, Nepal’s culture has been shaped by Hinduism, Buddhism, and other ancient beliefs, blending different practices and customs. Nepal’s culture is an amazing blend of different customs, from its caste system to the festivals, rituals, art, music, literature and ancient architecture. All these aspects together reflect the country’s past and its current way of life.

If you really wish to visit the locations mentioned above, we have got you covered.