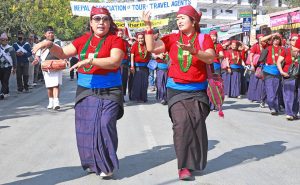 Every year, the Pokhara Street Festival gets going in the city of Pokhara. The program is organized by the Restaurant and Bar Association (REBAN) Pokhara, Nepal. It’s an awesome way to show off the unique culture and customs of the place and brings people from everywhere to check it out with the slogan ‘Eat on the road, enjoy on the road’. The 24th Pokhara street festival took place from 28th Dec of 2022 to 1st of  2023 on the main street of the city where thousands of people participated.

The street festival is one of the biggest cultural shows in the country. The festival included traditional and cultural dance performances, floats displaying the richness of Pokhara’s culture, and more.Vehicles were prohibited from the designated area from Fishtail gate to Jarebar.

At night, the Lakeside area is all lit up and the partying gets even better with live music acts! There were all sorts of options, like food and clothing vendors, plus activities for the kiddos. And to top it off, they had Lok-Dohori shows in the afternoons.

At the festival there were plenty of things to do, like cultural performances, art and food exhibitions, Dohori singing competitions, parades, night concerts, boat races, veterans tennis tournaments, waiter races, tug-of-war and documentaries about popular spots in Pokhara.

The last day of the festival was also the inauguration of Pokhara international airport. After Kathmandu and Bhairahawa, Chinnedanda will house the $216 million international airport that would serve as Nepal’s third international hub. The construction of the new airport took five years and five months to complete. People are now quite enthusiastic about the new infrastructure and its potential to revitalize the tourism industry after three years of uncertainty. Overall, The new Pokhara International Airport will eventually aid in increasing the amount of tourists. PM Puspa Kamal Dahal inaugurated the airport on the new year’s day.

Aama Samuha from all around Pokhara got behind the festival. People got to see all sorts of tasty treats using traditional cooking techniques and tools. Different villages’ mom groups set up homestays to help push rural tourism, and they made local organic food too. The goal was to help out rural tourism while also highlighting traditional Nepali foods like millet bread and momos.

At the festival, there was lots of local food plus a bunch of other cuisines like Indian, Chinese and Continental. The restaurants and food stalls were even giving out deals and discounts to entice people. The Pokhara Street Festival was awesome! It had great food and was a cool way to experience Nepali art and culture.

The festival was created to educate both local travelers and students about Nepalese culture and arts and to give foreigners a better understanding of the country and its people.

Organizers spread the word about the festival by doing promotional campaigns in cities both in Nepal and overseas.

At the festival, people had the chance to watch a cultural parade put on by various communities, like Gurung, Magal, Bujel, Tal, Kilat and Newar. Those who attended had a blast grooving to bhajans, chutkas and panche bhajas (a set of five traditional Nepalese musical instruments) in the streets.

The business owners in Pokhara reckon the festival has become well-known all over the country. It has really helped to promote activities such as paragliding in Pokhara and homestays in and around Kaski, and it brings in a ton of people from within Nepal. During the festival period, hotels were packed.

People from all across the city and from many backgrounds joined together for the 24th annual Pokhara street festival, which was a blast. The local economy benefited greatly from it, and tourists also got to experience Pokhara’s rich cultural diversity through the vendors and artists who sold their wares to the large audience that attended.

In summary, the 24th Pokhara Street Festival was a huge success celebrating the city’s culture and traditions. It brought everyone in town together and provided a platform for local artists and vendors to showcase their work.­

If you wish to enjoy the 25th Pokhara street festival, stay prepared and we have got your traveling activities covered.